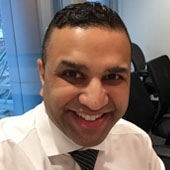 "Your bet as a trader is not on the fundamentals – it’s on what happens to the price as a result of those fundamentals."

Toronto-based Huzefa Hamid is a retail Forex trader who uses technical analysis to find his edge in the currency markets. He believes that unlike news or fundamental trading which relies heavily on the traders' emotions, technical analysis is the best way to find clean, realistic directions for future price movements. Huzefa is a member of the Canadian Society of Technical Analysts.

Huzefa trades mostly on the major currency pairs, though sometimes he trades crosses. Though Huzefa feels no loyalty to a specific Forex trading platform, he is partial to MetaTrader for his charting, which is a pivotal part of his trading strategy. He says that he can implement his trades on any platform offered by any of the brokers he uses.

When it comes to charting, Huzefa uses a few indicators, but he favors Fibonacci retracement levels, specifically those of 50% and 61.8%. He has written the course for FX Academy about this trading method and has authored dozens of articles about the subject.