What is a Price Action Strategy?

By focusing solely on price you can eliminate a lot of confusion and overthinking. That’s not to say that there aren’t going to be other factors that impact your decisions sometimes, such as an impending economic announcement. For example, if your strategy says go ahead and buy USD/CAD, common sense tells you not to do it moments ahead of the Nonfarm Payroll Announcement. (However, there are some purists out there who will go ahead and fire off a trade even though volatility is about to pick up.)

When you trade using a price action strategy, you assume that all of the information that the market is aware of is reflected in price. In fact, that’s the basis of most technical analysis in its purest form. While a fundamental technician may look at the economic figures for the European Union as the basis of trading of the Euro, a price action strategist will simply look at what the markets are doing and assume that the markets know what they are doing. After all, it doesn’t matter what markets are “supposed” to do, only what they actually end up doing.

A simple and elegant solution is what most traders are missing. By focusing on how the market is behaving, you are moving with crowd psychology and not trying to guess what traders are thinking. That’s a fool’s errand, as there are thousands upon thousands of traders out there, and to understand what they are all thinking would require superhuman powers. However, if you notice that the EUR/USD pair is rising, at the end of the day that’s all that matters. You know that you want to be buying that pair, not selling it.

Far too many traders that we have known over the years get what is known as “paralysis by analysis.” This means that they will have various indicators and rules with their trading system that often conflict. This means that they essentially are stuck doing nothing, because the 14 things that need to line up just right aren’t doing so currently. You would be surprised at the complexity of some systems We have seen.

A couple of examples

An example of a price action strategy might include something as simple as the way markets react to a large, round, psychologically significant number. For example, say you are looking at the EUR/USD pair, and you notice that the longer-term trend is positive, but recently the markets have been pulling back. As it pulls back to the round figure of 1.15, you notice that the market bounces. As it goes with the longer-term trend, that is an example of price action trading, as you are simply paying attention to what the markets are doing and following. You are not trying to guess what people are thinking, you are not worried about GDP in the European Union, and you are keeping the trade simple. You recognize that the 1.15 level has meaning to the market, and if we were to break down below that level, then the buyers didn’t prevail. This means that you do not wish to be the long of this pair. On the attached chart below, you can see that I have clearly marked at the 1.15 level an area that seems to be attracting buyers in the . 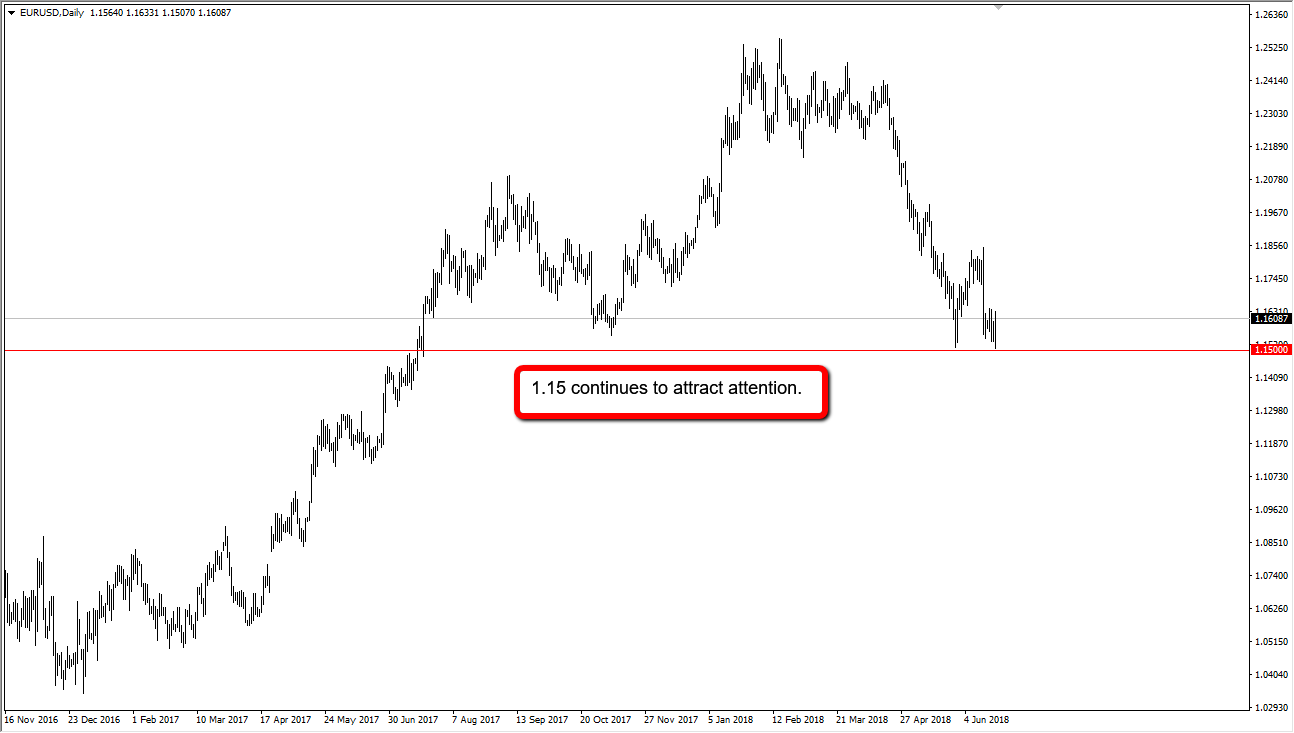 Another example could be something as simple as waiting for a hammer or shooting star candlestick. I know traders that use daily hammers and shooting stars as trade signals that the trend is getting ready to reverse. They don’t question anything beyond the fact that the candlestick had formed and placed their trade accordingly. Typically though, traders that use this type of candlestick price action strategy will also prefer these candlesticks to be with the overall trend, and perhaps even at the above-mentioned large, round, psychologically significant type of number. On the chart below, you can see that a shooting star formed in the GBP/USD pair. Many traders I know will short the market as soon as you break the bottom of that candlestick, as it shows a proclivity to fall. 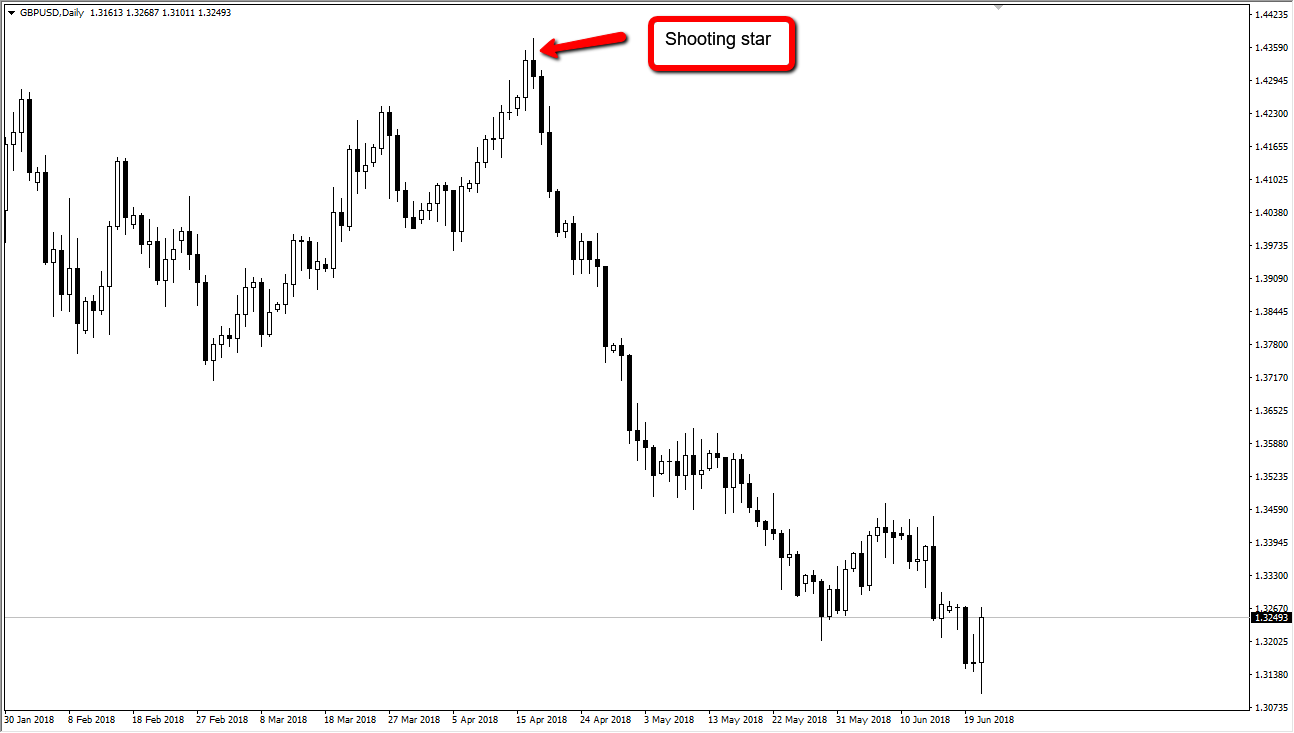 There are a multitude of other trading systems involving price action that go far beyond the scope of this article. However, it should be noted that any time you are using candlestick methodology, at least in so much as choosing which way to trade a market, you are using some type of price action strategy, even if just in the most minor of ways.

Institutional traders have so much more information

One of the main reasons I preach using a price action strategy is that institutional traders, who by the way are your competitors, have access to much quicker and much more in depth information than you do. You do not have a team of quantitative scientists working on the latest algorithm to trade the currency market, nor do you have a team of economist giving you ideas as to the fundamental attitude and likelihood of a market to move. By following price, this allows you to clear the clutter that could be in your way. Remember, it’s not just trading capital that you should be protecting, it’s also your mental capital.

That’s the point of price action trading. It levels the playing field as you are not trying to outthink the market. After all, we are not in the market to sit in front of a computer all day. We are in the market to profit, thereby making life less stressful. That’s the irony of being a trader, it's an extraordinarily stressful thing to do, but most of that stress is self-induced. To put it another way, as my grandfather used to say: “it’s not the WHY that matters, it’s the WHAT.”

As soon as I stopped worrying about a lot of the noise around the financial markets and started paying attention to what the price was actually doing, trading became so much simpler.