Over the years I’ve written hundreds of articles addressing nearly every aspect of trading that I use regularly (and sometimes less regularly).  While much of the feedback has been positive, many readers have commented that my articles are a bit too advanced and that more basic information would make them feel more comfortable to start trading.  Since I value your feedback, I’ve written this article to focus on the core issues that every trader should know before getting started.

Over the years I’ve written hundreds of articles addressing nearly every aspect of trading that I use regularly (and sometimes less regularly).  While much of the feedback has been positive, many readers have commented that my articles are a bit too advanced and that more basic information would make them feel more comfortable to start trading.  Since I value your feedback, I’ve written this article to focus on the core issues that every trader should know before getting started.

“Forex” just means “foreign exchange”. It is the rate of exchange between one currency and another currency. The price is (usually) how much of the second currency you pay for 1 unit of the first currency. For example, if you read that EUR/USD is currently trading at 1.2262, that means that 1 Euro is worth $1.2262. Some currency pairs do it the other way around, which can be a little confusing.

Banks all over the world will exchange currencies for their own dealings, and for their clients. International businesses need to exchange enormous amounts of currency, making Forex the largest and most active market in the world. As there is no centralized market, the rates quoted by banks from second to second will diverge slightly. The same thing happens between different Forex brokers.

What is a Forex Broker?

A Forex broker is a company that offers a price on several Forex currency pairs and allows clients to deposit funds which can be used to trade the relative values of the currencies against each other. This is often accomplished without any actual currency changing hands and is effectively done by betting on a price movement. For example, you deposit $200 with Forex broker ABC. You think the Euro is going to rise against the U.S. Dollar, so you “buy” (also called “going long”) a quantity of Euros with Dollars, hoping to exchange it back later for a profit, which will be added to your account balance with ABC broker. Many Forex brokers do not actually buy and sell currencies in a real market behind the scenes to match their clients’ trades, so their profitability is based upon the fact that most of their clients lose money.

What is a CFD (Contract for Difference)?

A contract for difference is just the most effective way, legally, for Forex brokers to offer shares and commodities and indices for trading to their clients. In simple terms, it is just a contract which says the broker pays you if the trade ends in the direction you wanted it to go, and you pay the broker if the opposite happens.

What is a Price Chart?

A price chart is a graphical representation of the movement of price of one tradable asset, for example the EUR/USD currency pair. The low, horizontal axis represents the passage of time, from left to right, with the right side showing the present unit of time. The vertical axis at the side represents the price. For example, the chart below is a Japanese Candlestick chart using 1-hour units – each candlestick represents what happened over 1 hour of time. Here, the price went from 1.2250 to 1.2475, and ended up at about 1.2300, over the period from 21st March to 4th April. Traders using technical analysis will use such price charts to make their trading decisions. 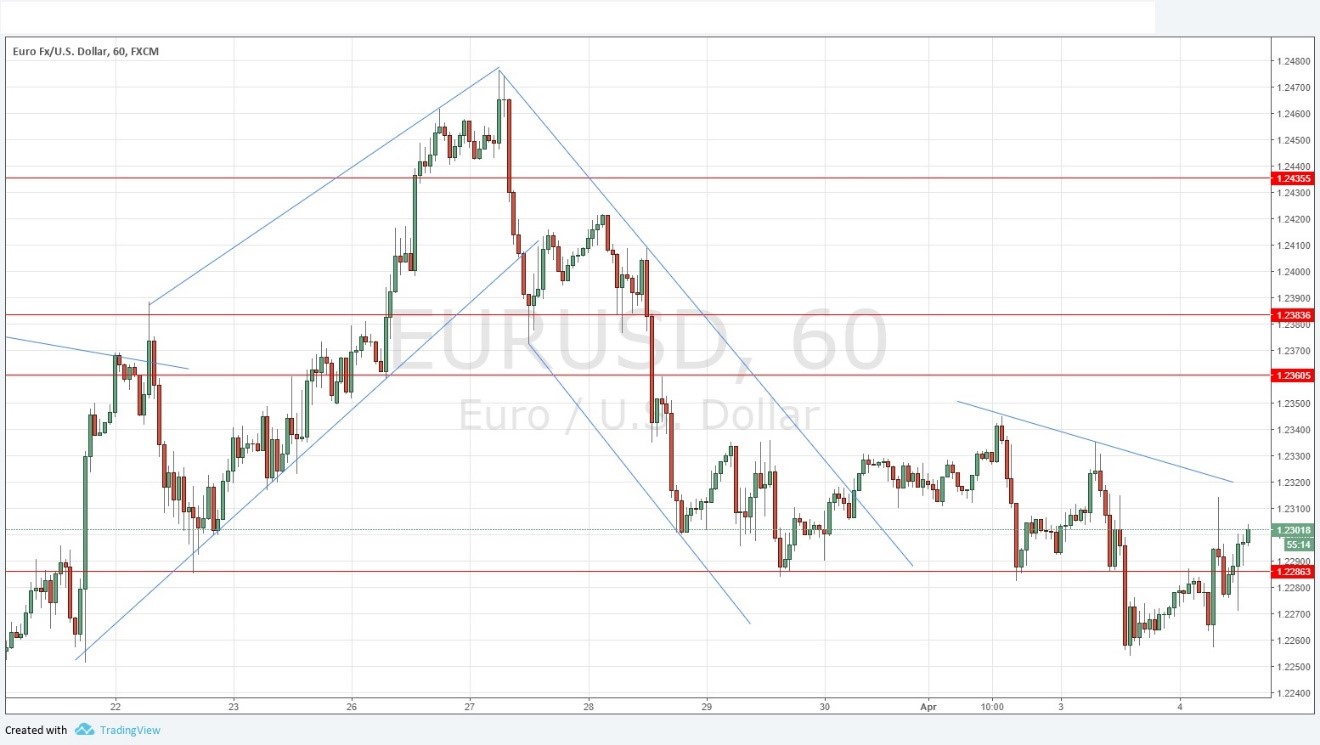 What are Bid and Ask Prices?

When you look at a screen of a broker’s price quotes, you will see two prices for each Forex currency pair listed, one a little higher and one a little lower. The higher price is known as the “bid” – this is the price you can buy (“go long”) at. The lower price is known as the “ask” – this is the price you can sell (“go short”) at. The difference between the two prices is known as the “bid/ask” spread and is effectively a commission which you pay the broker every time you enter then exit a trade (known as making a “round trip”). It means that you start every single trade with a small loss.  This is a small but significant handicap to traders. It also means that the more often you trade, the more you pay overall as a proportion of the money you are risking, and hopefully earning too.

When you buy or sell something, the amount of what you are buying or selling must be defined and quantified. Forex is no exception. In most currency pairs, 1 “lot” represents 100,000 units of one of the currencies, usually the second currency. For example, 1 lot of EUR/USD equals $100,000. Luckily, almost all Forex brokers allow clients to trade in quantities as small as 0.01 lots (1 micro lot, equaling $1,000), as well as offering leverage, which means you don’t need to deposit $100,000 or even $1,000 to make a trade.

When you trade Forex, you exchange one currency for another (that moment is also known as “trade entry” or just “entry”), then change it back (known as “trade exit”, or just “exit”). You hope to make a profit, but you might make a loss. A crucial part of becoming a successful, long-term trader is accepting that you will lose many of your trades, maybe even most of them, while you make larger profits from the ones which do win.

What are “Entries” and “Exits”?

See What is a “Trade” above.

What is a Stop Loss?

A stop loss is an order you give your Forex broker to exit the trade when it has reached a certain maximum loss. This is also known as a “hard” stop loss. You may also have a “soft” or “mental” stop loss, which is not an order placed with your broker but a negative amount at which you intend to exit the trade manually.

What is a Take Profit Order / Profit Target?

This is the level at which you exit a trade which is making a profit. You can place this order in your broker’s platform and they should implement the exit if the level is reached.

What is a Trend?

A trend is a persistent movement of the price in one direction. It is often characterized as a series of higher highs and higher lows if an upwards trend (an uptrend), or lower highs and lower lows if a downwards trend (a downtrend). An important aspect of a trend is that although the general movement is in one direction over the long-term, the price will move in both directions from time to time while the trend is going on. Trading with the trend is the most powerful chance most traders will ever have to make money.

This is the average profit or loss you expect to make on a trade, as a percentage of the amount that you risk. For example, a trading strategy which you think has a positive expectancy of 25%, should on average make a profit of 25% per trade. Some trades will be winners and some losers, of course. It is the average result which is important. Note that you can lose most of your trades and still maintain a good average profitable expectancy, if you win a greater amount on a winning trade than you do on a losing trade. If you use a trading strategy, it is very important that the strategy has a genuine long-term positive expectancy, otherwise you will lose money over the long run.

Return is the profit or loss you make over a period. It is usually expressed as a percentage of the amount of money you began the period with. For example, if you begin with $1,000 and make $100 of profit in a month, you made a monthly return of 10%. If you lose $100 instead and end up with $900 at the end of the month, you made a negative return (more commonly expressed as a loss) of 10%.

What is Money Management?

Basically, money management is whatever process you use to decide how much of your money you are going to risk on a trade. Most successful traders use some type of formula which calculates a percentage of their account value. As markets tend to produce extended winning and losing streaks, this method can minimize total losses during losing streaks and maximize total profits during winning streaks. As an example, imagine two traders starting with $1,000. Trader A decides to risk 1% of her money per trade, while Trader B decides to risk $10 per trade. They take the same trades and have the same results. When the first trade happens, both will be risking $10. Let’s imagine that both traders have five winning trades in a row, all of which make a profit of 200% of the amount risked. Trader A risking 1% on each trade will end with $1,104.08. Trader B risking $10 per trade will end with $1,100. Now let’s imagine 5 consecutive losing trades. Trader A will end with $950.99, while Trader B will end with $950. These differences may seem small, but they add up (compound) over time. There are many different money management strategies. One to always avoid is the Martingale strategy (adding to losing trades).

What is a Unit of Risk?

Traders will use different quantities in different trades. For example, in one trade the stop loss might be 40 pips away from the entry price, in another 60 pips, etc. This means that measuring trade results in pips is meaningless. A better way to measure and monitor your results as a trader is by risking the same cash amount on each trade and treating the maximum loss on each trade as 1 unit of risk and measuring the profits of any winning trade proportionately. For example, imagine that in one trade the risk is 50 pips and the profit is 50 pips, while on the second trade the risk is 20 pips and the loss is 20 pips. You could say you made a profit of 30 pips. Yet if you risked the same proportion of your money on each trade, the true result is break even.

I hope this has been useful and helped you learn some concepts which will now enable you to get more out of Forex. Additional information explaining the basics of Forex trading can be found by browsing through our Forex articles.